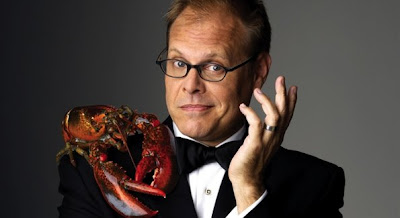 then you don't know what you're missing.  The show is described thusly:  "Pop culture, comedy, and plain good eating: Host Alton Brown explores the origins of ingredients, decodes culinary customs and presents food and equipment trends. Punctuated by unusual interludes, simple preparations and unconventional discussions, he'll bring you food in its finest and funniest form."

The great thing about Good Eats

is that you will learn the basics.  Scrambled eggs?  Doesn't really sound complicated does it?  You probably didn't know you needed to watch a cooking show to make scrambled eggs, did you?  Well, you were wrong.  Alton Brown (AB) breaks down the basic science behind cooking and trust me, your scrambled eggs will be better.

So anyway, I mentioned in my prior post Spain is the New France that my time in Spain was the first step in my culinary awakening (ok that sounded weird, but I don't know how else to say it).  I guess the second big influence would have to be Good Eats

AB has done some other shows on Food Network, like Feasting on Asphalt

, and Feasting on Waves

, but truthfully they were only mildly entertaining in my humble opinion.

AB has also put out a number of books.  The only one I've read so far is Gear for your Kitchen